Its All About Money, In Their Pockets 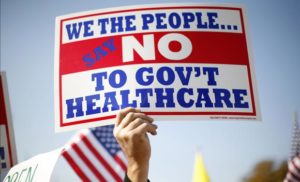 If you ever forgot that Dems and Repubs are the same, look at the healthcare nightmare they just presented. They are not for us folks, they are for themselves and their donors. Period.

This is why they hid this process from Rand Paul. The Republicans (and I suspect some colluding Democrats) devised this ‘plan’ behind a closed door with an armed guard in front of it. A sitting Republican Senator, Rand Paul, was allowed in the room. This was clearly done because Paul is a a Libertarian in a Republican disguise (just as Senator Bernie Sanders is a socialist in a Democrat disguise). Clearly the ‘transparent’ process that the Republicans had been crowing about wasn’t anything like that at all.

I would surmise that it wasn’t a process at all. I am confident that this plan was something they had in their back pocket all along, concocted in collusion with their Dem partners in crime.

It’s Us Against Them 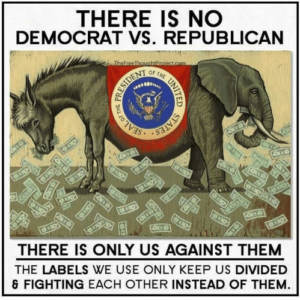 Let’s get something really clear right up front. These people are elected by the citizenry of the United States of America, but they are bought and paid for by the lobbying groups that surround every component of their lives not the least of which is the mighty healthcare lobby.

They want us divided against one another, arguing ‘Republican’ versus ‘Democrat” and “Conservative” versus “Liberal”. Stop it you sheep. It is we the
people against them, the puppets of major industry. If they were there to do what we want as a people, what is best for us then why can they not address the core issues effecting our healthcare problems?

3. Eliminate the restrictions and bureaucratic governmental red-tape from medical practices.

The plan put forward by the Republicans is lipstick on the rotting corpse of a Democrat pig called ObamaCare. It’s all a charade to keep us divided while they are working together, against us for themselves. 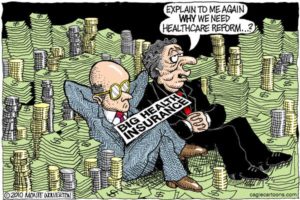