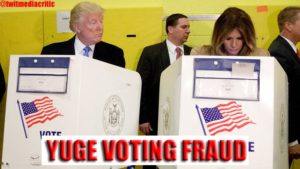 The Twitterverse is atwitter about #theTrump saying he will launch an official investigation into the possibility of voter fraud in the 2016 election. The snark and dismissal of his view is at an impressive level. My question is, why? Why now?

Does this seem like it was spawned from his inability to accept losing at something?

How do we have that perception of him? Do we know this guy? Have we gleaned insight filtered through the media? From interviews with people he has worked with who have seriously political differences and axes grinding away on spinning stones? We have a view of him based off all those things, but not from first hand knowledge. Kind of like our view of voter fraud. We have been told what to believe based on what is most beneficial to those who are saying it, that is politics.

Was there wide-spread voter fraud during the 2016 presidential election?

n my recollection, there has never been an issue that has drawn both sides of the isle together as much as this one. Let’s be honest and think critically for a moment. The career politicians cannot allow anyone to question the legitimacy of the device that allows them so much power, influence and fortune. They talk about how no one can question the election and allege fraud in the voting process. Why?

How could there be massive voting fraud? I mean think about it:

It is almost as if they are hiding something, isn’t it?

From junior staffer to senior Senator, news desk scrub to network anchor, everyone is making fun of Donald #theTrump. Politicians are screaming that investigating the legitimacy of the election promise undermines our whole country’s legitimacy, now that its not Jill Stein doing it.

Remember when Obama was talking about the legitimacy of voter fraud? I guess it would depend on which times as to his view as is seen in this tweet.

He’s Crazy. No One Can Argue That.

Do I think #theTrump is an egomaniac? Yes. If you need a reminder you can read my post about it from March 24th, 2016 called “Mental Illness and Donald Trump – Megalomania.” Were there millions of illegal votes cast in this presidential election cycle? How the hell would I know? How the hell would you know? Maybe we all will know if it is investigated.

What if he is right? What if he does know something we don’t? What if he knew something early on that no regular politician would ever admit? Trump is already in office, has very little chance to be re-elected and is term limited anyway.

Why would he not slash and burn if he knows there is some systemic abuse of the voting process for national elections? If he’s wrong, people keep laugh. If not…