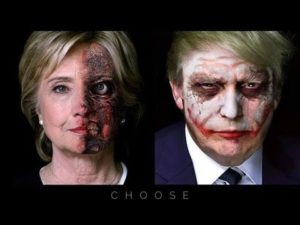 I see no redeeming value in either the Repub or Democrat candidates. I think the US electorate is too deeply indoctrinated in the ‘least worst of mentality’ to see this is not an A or B question.

Both parties are corrupt. Both are self-serving only. Both are deeply entrenched in the now vulgar art of politics that deception is their strongest trait.

The system needs an enema.

Most of our citizenry are suffering from battered woman syndrome, PTSD, and outright ignorance. I have no quarrel with people choosing to vote for either of these maniacal egos. I have an issue with people voting against the other candidate alone. But, primarily my issue is with the fourth estate and education. It is the failure of these bodies to do their job and their incestuous relationship with party politics.

The system is rigged, ask Bernie. Ask anyone who knows and still can be honest. It’s all about deception, smoke screens, and outright lies.

I wake every fucking morning thrilled my grandfather is dead. Dead. Stone cold dead. He would be so ashamed and embarrassed for what a nightmare this has all become. But I know what he tell me. He’d say it all has to swing wildly out of control to come back to balance. My friends, welcome to wildly out of control.

I love you all. I despise these people. I got out of broadcast news because I was watching the metamorphosis happen real time. I couldn’t do a damned thing about it and I couldn’t be a party to it.

I’m reminded of the movie Backdraft, yes that one. In particular, Donald Sutherland as Ronald Bartell.

He’s asked “What would you like to do to the whole world?”

The kerosene is on both the Democrat and Republican Parties, who’s got the match?