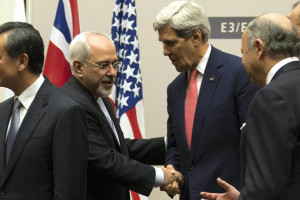 Well from the beginning this should be a treaty and voted on via the Congress. Basically the way it is setup now is that Congress can say no to it and Obama can veto it and go on it’s merry way.

That’s just bullshit, which is part of the reason people said the Congressional mess that was passed to give them an up or down vote on what the Obama Administration sent them was window dressing. It is a bit like putting the cart before the horse, then shooting the horse in the head and hitching up a new one in front of the horse. Follow me?

So why is this even happening? You do realize that the UN already has the framework in place to take deal with this, but the UN Inspectors would go in and say ‘let us in’ and Iran would tell them to fuck off. This exact thing WILL happen again. We also only will be able to go into sites designated by Iran as military sites if we ask nicely, and they agree. If they don’t… well we will need to go fuck off.

Without getting into the finer points, because it is pointless. We are basically handing them 10 billion in cash, lifting embargoes, and negotiating something we already have control over. No one would enforce the UN terms, who the hell will enforce these? China? Russia?

When China and Russia are all for it… Yet another #fail.