First, the prelims on @UFCFightPass. How can I be wide awake and nearly fall asleep? That is about it other than the cringe-fest watching Alexis Dufresne (@ADufresneUFC) get humiliated and make the @UFC look horrible? She was beaten to a pulp, not @UFC quality at all. Simply put, I need to know was she there purely because she is in the stable of Dan Henderson (@danhendo)?

Part of me finds it hard to believe that would be why she was thrown to the wolf, being Marion Reneau aka @BelizeanBruiser for such reasons… but why else was she there? Anyone? 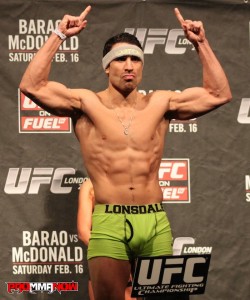 So that was that, basically. The under-card (aka not the ‘early prelims’) was not something that would drive people to the PPV. The exception being Paul Felder (@felderpaul) who demonstrated how to be the recipient of the best knockout of the year so far by  (@lastcall155). The third spinning back fist took Paul to the mat and that was it… even though Danny Castillo added a few shots after Paul was clearly starched and before the referee got in to wave him off. I am a fan, not of his hair, but of his talent. May be an up and comer, and he did get the KO of the night.
Here it is with espn’z commercial – http://espn.go.com/video/clip?id=espn:12117343%20

The main card on #PPV was not too bad actually. I would have liked to have seen Donald Cerrone (@Cowboycerrone) nail that punk Myles Jury (@FuryJury) to the Octagon mat. He came through, took care of the young ‘en but the Cowboy did a fine job despite his feeling that he gave a poor performance. Cerrone, you did a fine job. Period. End of Paragraph. 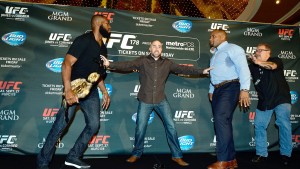 As for the Main Event… @dc_mma (Daniel Cormier) the presser after the fight was a bit disappointing. More-so than that is was gassed in the fight, worked inside but it seemed he didn’t go in for the kill. My only thought is that he has less of a battery than Bones. I wanted DC to win, but he gave up, and in the presser was sad. If you didn’t get to watch it, DC had his fangs pulled out during that fight.

Ultimately maybe as a long time @UFC fan, I might actually miss assholes like Tito Ortiz (@titoortiz) because they didn’t play villain but are in fact that. I believe that is clear, that in the early days the vitriol and obvious desire to destroy fighters as enemies was very compelling. #MMA fans know what is the hype-machine looks like, can take the mouthing off for what it is… publicity and marketing.

I worry about myself and my personal desire to want to see true disgust and hatred between adversaries. So where am I now?

Simple, be a man like @Cowboycerrone. Fuck @JonnyBones I look forward to watching him deteriorate, in time he will be exposed.