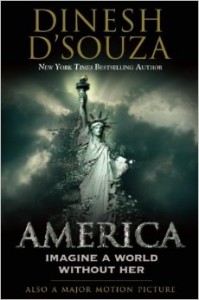 America: Imagine a World Without Her

Two things are clearly apparent in that first paragraph… COSTCO and significant donors to the Democratic Party. So why on Earth would people think there may be some sort of political motivation for COSTCO executive management pulling Dinesh D’Souza’s book “America: Imagine a World Without Her” from all COSTCO outlets? I mean, they always are involved in what books are being sold right?

Currently D’Souza’s book is #1 on Amazon.com’s best sellers list, it is #4 on Barnes and Noble’s Bestseller List. You may ask, well what about the New York Times best sellers list? Well, oddly enough it has been left off the list while Hillary Clinton’s book is still in the top five… how do you get on the NYT’s best seller list? No one but the creators of the list and logically the upper management know, since they do not release the intricacies of the process. I was shocked they allowed Hillary Clinton’s book to drop to #2 this week after only two weeks on the list.

If you don’t think that those who detest the concept of pride in our country, of all we have done, all we could continue to do (unless we are hopelessly sabotaged.) This shows desperation by those who control the Democratic political machine, not the politicians the ones who pay them to play out their personal ideology.