First, I said “Shock Jock” because that term is back quite loudly in the media. Let’s face it, any loyal or at least regular listeners to “The Opie and Anthony Show” (@oandashow) on Sirius/XM (@siriusxm) have seen this coming down the pike for years. It began when XM and Sirius ‘merged’ and the people that understood the show and its personalities left for a variety of publicly stated reasons. 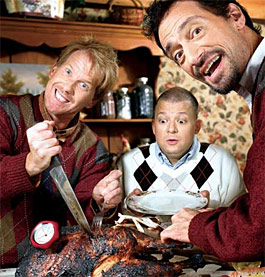 There were suspensions, which seemed arbitrary at best. Then pulling the boys from the great private studio they shared with Ron and Fez apart from the main SXM facility. I loved that studio and the limited times I was able to be there, they loved it too… then came the glass box (which always makes me recall the Stern movie when they covered the windows with newspaper.) So now they were directly under the thumb of management… again, think Stern and ‘pig-vomit’. Speaking of, another trigger was when Howie began to stick it to SXM by working at best occasionally once he got his big money. He toned things down happy to take the money and milk the company for their poor choice of investment.

With SXM dicking over “East Side” Dave McDonald (@eastsidedave) from the Ron and Fez Show you had to know things were getting ugly. O&A would not tone things down, although the natural ‘chilling’ of Opie (@opieradio) occurred after he and his wife had their child. Jim Norton (@jimnorton) was getting pulled in many directions, and his stress level increasing led to more slips of the truth behind what was really going on behind the scenes at the SXM main facility. There were more meetings, and the uneasiness in the studio became more palatable. 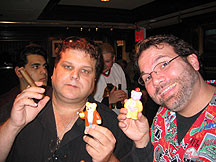 The Ron and Fez were pulled off “The Virus” and put on “Raw Dog.” I became very concerned over this, sensing there was a foul odor in the coming breeze… little did I know SXM would be so ready, even EAGER to throttle Anthony Cumia (@anthonycumia). There was no looking into what happened, there was a great deal of reading into what was tweeted and it resulted in what SXM considered a friable offense. You have to love a publicly traded company moving so unilaterally from the executives.

So where are we at? Well, it is hard to tell. I think the break Ant and SXM is done for good. Opie and Jim have a contract to finish out with them. Anthony has said he will continue to work on his “Live from the Compound” production that he does from his fairly extensive home studio. Do I think O&A will be killed off by SXM, highly doubtful. Let’s be serious SXM is having a difficult time, just check the stock price. Also, look at the success that (don’t crucify) me here but Glenn Beck (@glennbeck) and The Blaze (@theblaze) are doing well as a subscription service streaming (as well as syndicating to terrestrial radio.)

Ant posted this link via Twitter to an article based on an interview Lloyd Grove (@TheLloydGrove) did with him for the Daily Beast. It is a good read and gives a clear timeline of what happened and what has been happening. http://thebea.st/1mge6cW