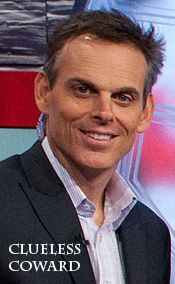 As things would go in the Crescent City, we are still dealing with a great deal of violence. New Orleans is a big place and most of the violence is confined to certain areas of town, as it is with many cities. There are good blocks and bad blocks, sometimes groups of blocks.

However the horse’s cock, Colin Cowherd’s recent comments have been festering inside my mind like some sort of diseased tissue. I can’t seem to shake it out of my head. I have written many blogs about Colin before, most I have never bothered posting just because I end up getting so bogged down in discussing his inadequacies as a broadcaster that just say fuck it.

However, this time I just wanted to post a quick one and say to him (@ESPN_Colin on Twitter if you would like to say hello) that his schtick has lost him any sort of credibility. He slid into Tony Kornheiser’s spot after he got fed up with ESPN’s bullshit (who isn’t really.) Colin’s TV partner is clearly so sick of him that she is leaving #ESPN. His constant harping on the ‘east coast sports bias’ is migraine inducing and he is just barely listenable with is fake laugh/little girl titter.

This guy (hesitate to call him a man) talks like he is scared to walk around the CBD. Seriously? Since I don’t see his involvement with cows, other than bullshit, I think he should go by Colin Coward. Don’t you? I know people who have walked all over this city with out fear alone and with their families. If you don’t have enough street sense to figure out not to walk alone down long dark alleys at 3AM when you are drunk off your ass, then that is just your own ignorance.

So Colin if you want to shit on a city who has people who would die for their team to succeed, then I suggest you take that shit, eat it, and die. Yes, my juvenile comeback is #ESAD.

This helped identify some issues with the system. Should be addressed by next week.