Once again I had great anticipations for my time at the New Orleans Fairgrounds today. No, I wasn’t there to do off track betting on the Derby (spoiler alert “I’ll Have Another” won). I was there for yet another final Saturday of Jazzfest. When the fuck am I going to learn? 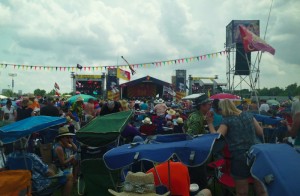 What a huge crowd and the ratio of people to assholes was higher than normal. Most everyone is great and into the flow, but there is always some old asshole there who thinks that because you accidentally nudged his chair or stepped on his blanket that you are trying to be a troublemaker. I had to sit some old douche down when I said “I’m sorry” and he responded “I don’t think you really are.” He we to get up, saw what he was dealing with and I looked him in the eye and said, “I said I am sorry because I mean it, if you want to be a dick keep talking.” He sat back down.

What I actually bumped was his canopy on his chair. I am also so pissed with how #Jazzfest2012 continues to allow people with portable chairs that are more like rickshaws in the gate. Lets be serious people, a pop up seat is enough. You are already fucking up the sight lines of people on the ground. However to put a canopy on top of your seat instead of wearing a hat or putting on SPF70 is just bullshit. Some of these things are so damned high I thought they should have needed a permit.

So I was behind a row of people old enough to remember when Irma Thomas was born… they all had them. Nice enough people, just no consideration for anyone else there. You aren’t supposed to be able to put up tents or tarps, so why do these things get a pass? I would really rather say fuck all chairs and go back to the good old days of everyone sitting on a blanket. Then again, @Jazzfest makes a killing selling their branded chairs… which, I might add, do NOT have canopies.

Anyway… got the new Cowboy Mouth CD, I will listen to it soon and review it. The songs I heard them play from it last weekend made it sound promising. I also got the board recording of that live show, which could sound like shit but is probably a good thing to relive the positive vibe that show had (opposite “The Boss”).

It was crowded as fuck, particularly the Acura Stage (as usual) but was able to see Allen Toussaint and Irma Thomas there. Then headed over to the Lagniappe Stage to hear “The Guitar Masters” featuring (let’s face it, starring) Jimmy Robinson, John Rankin, Phil DeGruy, and Cranston Clements. The plan was to split a little early and head down to the Jazz Tent to go hear Herbie Hancock. But they were literally turning people away. He should have been in a bigger venue. I say this every fucking year. So I missed him yet again. Every damned Jazzfest.

I’ll be back tomorrow and will violate all my local love and be a huge hypocrite. How? I will see that damned Foo Fighters, but you have to give me a pass on that. I saw their first real show and haven’t seen them since, so it will be a spiritual journey of sorts. Ok, I just want to see them. There, are you happy now?