Having been involved in booking festivals, I know that there is an art to it. You have many variables that you have to deal with:

1. Artist’s touring/gigging schedules
2. Booking multiple stages with the least bit of overlap in concert-goer interest.
3. Putting the right band on the right sized stage
4. Artist’s eccentricities with what time of day they can/will perform
– this is often something an artist uses to get a prime time, based on when their voices ‘wake up’
5. Then the king of them all, egos. 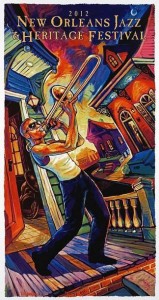 So I could spend this blog bitching about what I see as being mis-steps in the New Orleans Jazz and Heritage Festival 2012  schedule, and I might a little. Sunday the 29th is a good example. It’s pretty self-explanatory if you look at it. http://lineup.nojazzfest.com/bands?sort=april29

I could also complain that Bruce Springsteen has exactly dick to do with New Orleans Jazz and Heritage. I am sure you could get about any artist to say they were inspired by New Orleans music and culture, but does that make you relevant? No.

Much of what has happened with NOLA Jazzfest is commercialization. It is about money, it is about being able to get musicians that wouldn’t have ever come down pre-Katrina. So why not take advantage of it. The thing that kills me is that even our local New Orleans Jazz and Heritage weekend has been lost to a similar sell out mentality (speaking of course of French Quarterfest.)

While it would be nice if we could see our NOLA bands all in one spot over the course of a day, we are saved by one thing. Usually we can catch them at one or many points throughout the week. That is part of what makes New Orleans what it is, our local bands are our playing locally and as a community we support them. Not as much as we should, but more than anywhere else in the country.

Go out and listen to some live, local music.