First, let me say all in all it was a great weekend of music and art in City Park for “The Voodoo Experience.” This blog is not meant to bad mouth the event promoters or coordinators, it is to get some real critical information out there for them to do things even better. Most of this can apply to Jazzfest New Orleans, if not everything.

With that being said, here is a laundry list of things I saw as being issues to consider for#Voodoofest2012. This list includes things I heard from staff, participants, vendors, and most importantly Voodoo ticket buyers. 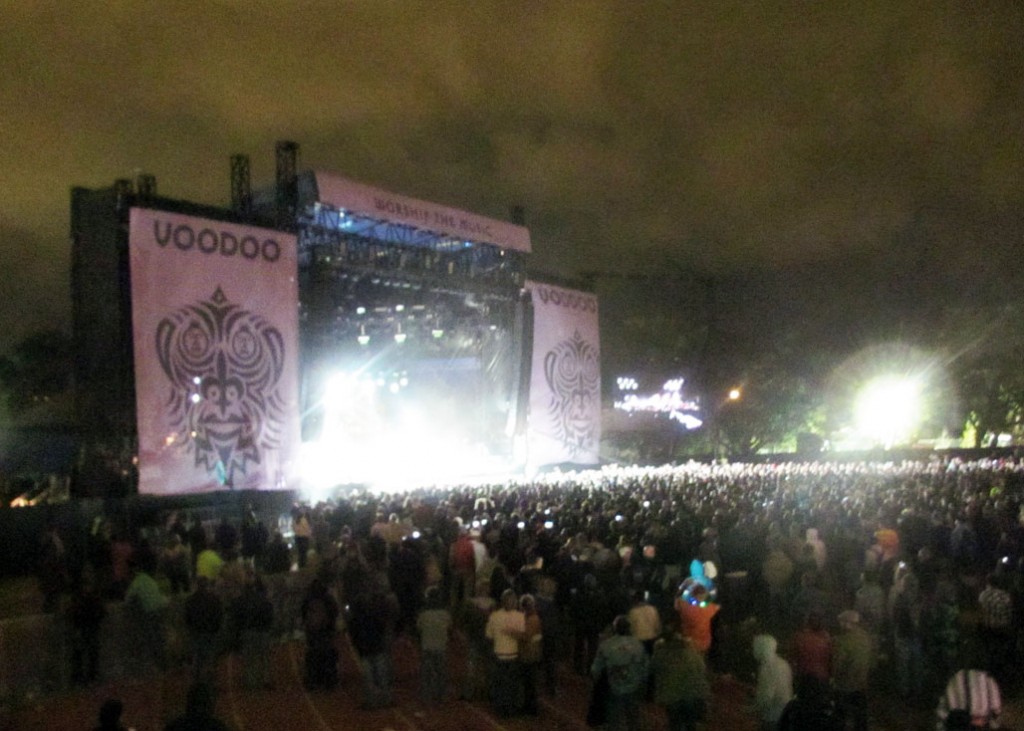 The Main Stage - The Voodoo Experience 2011

1. Not to sound like a broken record (are you listening JazzFest?) but you MUST provide more bathroom facilities, included with this is at least some hand sanitizer or dry soap.

– There was a pathetic lack of porta-johns, resulting in people relieving themselves in various places you would rather not have them do so.

– You don’t want people having shitty hands passing off cash to your vendors because there was nothing to wash their hands with when done waiting in line for over an hour to use a full portable shitter.

– When you frequently have lines for the general admission porta-johns that are more than 75 yard long multiple times during the weekend, you have too few facilities. Do not do the minimum that the Board of Health allows, do what is best for the people.

– There were even a gross (literally) lack of the nice ones that those in the VIP area, seriously. How much more did VIP tickets cost with that being one of the major perks?

– I will be honest, I had to piss behind a tree once or twice in order not to explode or piss myself. The same goes for many people I was there with and people I met at the fest. I am sure you don’t want the place to end up like the French Quarter after Mardi Gras, unless someone up the food chain has a fetish for the smell of piss and stepping in human excrement. (possible)

2. Lack of signage: People were lost, yes even the sober people.

– The final night, well after the Raconteurs decided to call it a night 20 minute early (much of the staff was saying it was due to the event asking them to end early) I ran into Momma Suzy. This wonderful woman who was running around alone loving life and enjoying yet another festival in her 60-ish years of life was lost. She was looking for a place to relieve herself. Trick there is, nothing was marked.

– This includes clearly marking parking areas and EXITS for vehicle and foot traffic from the event.

– RULE: Without Signage you can’t find things… that is a pretty simple concept.

3. Do NOT put so many stages so close together. That is just not smart.

– There were three stages within 15 yards of one another. NOTE: Just because the stages are not pointing at one another does not mean sound only goes directly out from the stage. The bleed from the Preservation Hall Big Band, to The Original Meters, to Cheap Trick (yes, they were there and on a smaller stage) was nearly maddening.

4. Think about the scheduling just a little.

– Other festivals are able to come up with cohesive line-ups and put them on properly sized stages. Going Mastodon, to Social Distortion, to Snoop Dog, to Blink 182 is about the most disjointed use of a main stage line-up ever.

– Have two main stages. Always, this is not Jazzfest people, think of it more like what is done with successful shows like Ozzfest and Lollapalooza.

– My suggestions for stage assignments / schedules?

* A good sized stage for DJ’s sponsored by Red Bull is too big for one guy with a #Apple #Mac laptop in it’s own cove is nonsensical.

* 2 smaller stages about the size of three that were clustered too close together but spread out, a main stage, a second stage slightly smaller than the main stage probably where the RedBull stage was, and a DJ world stage designed to allow people to SEE the DJ not just their equipment (they are often short give these people a fucking riser will you?).- Keep bands on the main stage, put rappers on the second stage (since they don’t need the room) on another, DJ’s in DJ world (since they have such a fast turn around), and use the smaller stages to highlight the up-n-comers as well as the more niche audience driven bands. I would think a NOLA local’s only stage would be great for WWOZ to sponsor.

– TWITTER: You should have made it clear what the official Twitter hastag should be for the event. Without doing this, you will never get the fest to trend and show up in the trending list, attracting more attention and ultimately people. I even asked @voodoonola what the official #hastag was and never got a response, so I used #Voodoo2011, others used a variety of other things. Good way for tweets from the event to be lost and to ensure it never trends.

– Partner with a social media company with an application that can bring people together and that is well known and widely used. #GroupMe is an app no one uses (as seen by only having 300 or so reviews on iTunes and the average being mediocre) versus something like Foursquare with over 44,000 reviews… at least FourSquare allows you to interact with other people who you don’t know or who you know without knowing their cell number. Personally, with no affiliation with FSq I think that is the best choice – you can stay anonymous if you choose, you can control access to your information, and you can have it linked to your Twitter and Facebook accounts so one update hits them all. This all promotes the event. This isn’t hard people.

6. Get portable cell towers placed around the site that will allow for people to get data access so they can hit social media from their phones without any trouble.

– This is free publicity folks. Give your ticket holders and artists the ability to get in touch with their friends/fans/followers without the headache of updates timing out. I tried via Sprint, AT&T, and Verizon… basically the same performance (or lack there of) for each. The local permanent cell sites cannot handle that much traffic, just augment it. It is a must in this type of connected culture.

7. Loosen up the main stage/s schedules.

– Let the bands play on… give them a minimum performance time and give them a more open-ended time to wrap up so if the crowd is feeling it they can give encores and even full second sets.

– Part of scheduling events like this is to give the stars time to get rolling and then to shine brightly. It also is important to realize who deserves more latitude and who hasn’t earned that right yet.

8. Rest Areas… just because it is not 95 degrees doesn’t mean people don’t need places to sit down, relax and socialize.

– You MUST give people a place to relax. Even if they are not people who are there for all three days, if they are out there for a full day, sitting on the grass isn’t going to cut it. Provide shelter from the weather in some places, random seating (possibly artists making seat sculptures), beanbags, whatever.

9. THE LOA/VIP: Those of us who had access to the VIP area were all befuddled.

– We had a descent place to chill by the main stage, but no VIP access to any other stages?

– I talked to some people at the Red Bull Bulletin stage, where it seemed there was VIP viewing and found out it was just for Red Bull VIPs only. The person said he had been approached dozens of times by LOA/VIP ticket holders who thought they would be allowed to watch from that area, only to be told it was not for them.

– If you are calling it VIP, it should be VIP to more than one stage otherwise just call it ‘Main Stage VIP and Lounge Access’

10. More visuals: “The Voodoo Experience” website was hyping many interesting art exhibits, including glowing orbs, the word tree, a lot of visually stimulating large scale artwork but some things were poorly displayed and some things appeared to not be there at all.

– Light the art that is not self-illuminating better. The things that were impressive to look at were lit with a few old par cans, and massively underwhelming. There was so much that could have been done with just some lighting gel and more cans, or with color changing LEDs.

So simply put, if you are going to call something an “Experience” make it the biggest and most stimulating to all the senses that you can. Don’t half ass something that has so much potential. We all have to work within impossible budgets these days, but if you get the right people recruiting sponsors to boost the production budget and get the best and brightest involved.

“The Voodoo Experience” has all the bones to make itself into a signature event dwarfing the over-hyped and too cool for school SXSW… maybe even something to reclaim #NOLA’s cool to the point of making Burning Man look like a smoldering cabbage patch kid.