First, let me chase off any of you who thought I meant Juggalos… no this has nothing to do with Insane Clown Posse. Go back to cutting yourself and plotting murder/suicide plots on you classmates.

I am not sure how I was unaware of this new show, but considering how fast cable shows come and go, it is not totally surprising. “Gigolos” is a show about a male escort company in the Las Vegas, Nevada area. It seems as if an enterprising popular guy from high school who couldn’t think of anything better to do for a living than fuck chicks: old, fat, or both. He has a stable of 5 ‘studs’ including himself who do outcalls and charge the ladies a few hundred dollars an hour on some sort of sliding scale, although I have yet to see what the true price list looks like. Probably some sort of legal issue.

As you can imagine, some of these guys are just man whores but others are obviously bisexual or just plain old gay. In a a few instances these guys aren’t able to even get a rod to bang these chicks. The first episode I watched had the boys pulling together for one of the obviously gay members of the group. It seems he didn’t have the money to go see his son on his birthday, so the leader of the doghouse(?) booked a gangbang that would allow for them to come up with the few thousand dollars that he needed. They did this without his knowledge and it was a huge pig fuck (literally and figuratively.) 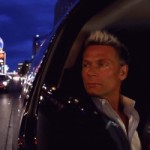 The over-tanned “Nazi” seemed to tap out since one of the other guys ‘accidentally’ bumped cocks or dripped ball sweat on his cock or something. So he took a shower and stood there watching while drinking a martini, looking like he was cruising at a gay bar. The client was trying to convince him to come and offer up the fourth cock for her pleasure (what a good girl) and he just stood there and bitched about the other guys and about how he has standards and wouldn’t fuck anything like this chick even for money. What kind of good man whore won’t fuck any old skank for a few hundred bucks. Could it be that it was because he knew it wasn’t going to result in him getting paid since this was being done for his co-worker to go see his kid? 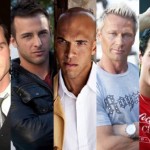 If you can overcome the gayness of what most of these guys radiate, or if that is something you enjoy… then it is worth taking a look. I am not sure I could tolerate more than a few episodes, but I am sure it will go away fairly quickly. I enjoy the awkwardness of most of the Janes. It is worth it just to see these closet cases being exposed on television and shown to be the true whores they are and would like to be.

Here is a link to the show: Showtime’s “Gigolos”

As for the show… 2/5 rating but worth it for the cringe value.