Imagine all the bullshit, hostility, anger, and family drama sucked out of American Chopper. You are left with a fairly shaky concept for a show. Think about it, all they do is build motorcycles themed for some company who wants to cash in on some free TV time on the show. Let’s be serious, those of us who are actual riders look at those bikes and don’t see bikes for bikers, they see artwork. I am kind of embarrassed for the Tuttles, you want to see people with a passion for bikes and riding look elsewhere. The old man may have been a biker at one time, but he is no longer.

Thankfully we now we have a show that the Discovery Channel has come up with that is based around a subject that is at least (if not more) bad-ass. If you haven’t taken some time to watch “Sons of Guns” set your DVR now. I will wait…

I’m serious, get your ass up now and go set your damned DVR and record this show.

You have a former Marine who is the antithesis of Paul Sr, you have his kid who is a hot tramp (said lovingly) with black nail polish, and a crew of guys who are down to earth and love what they are doing. What they are doing is making weapons of all sorts.

“Sons of Guns” is based around ‘Red Jacket Firearms‘ a custom weapon shop based in Baton Rouge, Louisiana. *as an aside, I think that fact alone makes them more laid back and less pompous than the boys from “American Chopper”* This is a show about genuinely good people with no bullshit who do things that are amazing with everything from pistols to flamethrowers.

I believe this show has legs as long as people get behind it, and if you watch it you will be behind it. It’s also not a bad thing that it is 30 minutes long currently. I think it is a good way to get people hooked and then they can expand shooting and take the show to an hour.

Let’s be serious, you can only see so many similar marketing tools… I mean motorcycles… being built. However, weapons? Not an assembly line of putting parts together to make a bike (sorry, not a chopper) for Subway or Tampax, but interesting hands on customization of weapons and actual invention of new technology.

Here is a video of the main man Will Hayden’s daughter / business manager Stephanie shooting one of their weapons.

And here is another promo shot of Steph, just because: 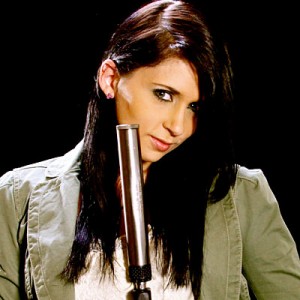 “The Science” doesn’t mean “the consensus.”

“The Science” told us to ignore all pre-COVID scientific policy guides for handling a pandemic, which strongly recommended never EVER doing lockdowns or shutdowns.

“The Science” means “the mainstream-narrative-approved position.”

This isn’t normal. Can we all agree that this is not normal?

Thread: Here is Fauci recently claiming that ‘we’ve lost’ more children from COVID than we ‘ever lose’ from the flu. This isn’t true. In the next tweet, see CDC estimates of flu deaths among children during recent flu seasons…