So I had been delaying my blog on Richard Branson’s iPad magazine until I was sure a second edition would come out.

I was under the impression it would be coming out monthly and when January rolled around and there was nothing… I thought maybe he called it a loss and scrapped it.

However, today Rupert Murdoch debuted his new iPad daily newspaper called “The Daily.” After fighting what must have been every @FoxNews viewer in the world trying to download it, I was finally successful. As I leafed through it (yes, as if it were really like a newspaper) I thought I would check in on old Dickie Bran…. and I’ll be damned “Project’ had a new edition available.

First, let me clarify something. These two are not in competition in this arena, others yes… in this instance no. Here is a quick breakdown: 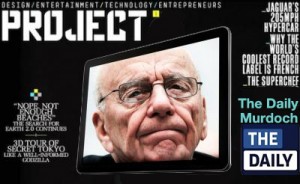 he most amusing part of this to me is that I remember the first digital magazines… do you? Initially they were sent via postal mail on 5.25″ floppy discs and eventually the amazing transition to CD (because there was no real internet access per-se available to the masses.)

Things have changed. Obviously. The key here is this, are people becoming too lazy to even bother reading no matter what the platform? Another consideration is, what kind of things do you need to include to keep the attention of readers without being too kitschy and hard to produce that it is too difficult to produce in a timely and profitable way.

I will spend some time reading through the latest “Project” and see how well the news is provided to me as I wake for the next few mornings with “The Daily” and comment further. I do wonder though, is the idea of calling it “The Daily’ a bright idea when the most widely recognized product for their target audience Jon Stewart’s @ComedyCentral’s “The Daily Show”?

Additionally, @FoxNews interrupted (a bit awkwardly) their programming to have Neil Cuvato interview Rupert Murdoch to make this announcement. I understand why the main man of News Corporation can do what he wants within his companies, but it did come off as being a bit… inappropriate. Doing it during an interview show is one thing, interrupting news coverage so he could be sure to get to his afternoon spa treatment is a bit gouache.