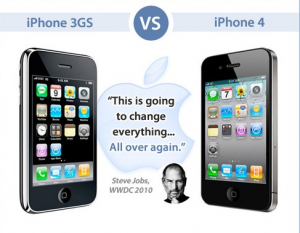 It Will Change Everything, Just Not As Soon for Me

It was one of those things that seems out of character for me. As I watched my friends all around me and even my father five head first into the iPhone 4, I refused to take the leap. By definition I am an early adopter, but with a long background of dealing with the newest and hottest electronics there are just certain things I could sense about this device. So they all were flashing their iPhone 4’s while I was still rocking my 3GS. Hell, it took me quite some time to bite the bullet and get a damned iPhone in the first place.

So while I was standing in line the day the iPad came out, I had trusted my blackberry for years, then (while keeping the berry) I got the iPhone 3GS. Listen, I realize there is a new iPhone coming out in the summer. I read other people’s blogs too… I know what it is that is coming down the pike. However, I was able to trade in the 3GS and get myself a refurbished (pardon me, a ‘renewed’) iPhone 4 for roughly $60 (plus another 2 year term with AT&T.)

So this was done about 8 hours ago. To this point I am happy with the device, not so damned happy with the transition from the old device to the new device. I had to re-arrange the icons for my apps (no fun at all even from the iTunes application.) Some of my apps that held local data were hosed, I imagine this could have had something to do with the fact that it wouldn’t allow me to do a restore from my 3GS backup.

The device itself is much faster, it seems to hold a more solid signal than my 3GS did, and I am a big fan of the cameras. First you have the ability to shoot from the front or the rear facing camera, but then you also have the raw speed increase in the functioning of the cameras. You hit the camera button and it opens the app quickly, it snaps pics quickly, and it seems the low light shutter speed issues are much better (meaning fewer blurry photos.)

However as I get into it, I will let you know if it goes down… I doubt it will go up at least until the next version is released.