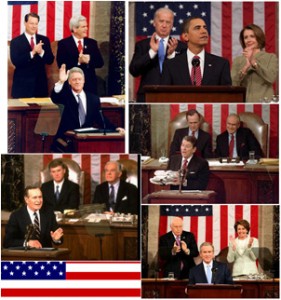 “After spending the first 7 minutes watching Obama walk to the podium, it appears things are about to begin…” that was my first thought.

My what a pep rally… honestly, I was hoping for cheerleaders but I guess the Capital Pages serve at least the sexual role of a cheerleader. I am sure it would have given Boehner a chance to smile genuinely instead of the repeated smirks or facial twitches (whichever they are.)

It would have been remarkable to have a microphone on Biden and Boehner. They had a lot to say to one another throughout the course of the pep-rally. I wonder if he was talking about some ‘big fucking deal’ or something. Never know with old Joe. I was surprised John didn’t have a putter and small practice green back there, or maybe a sun lamp. 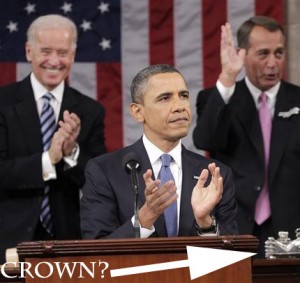 Is that a crown in front of Boehner?

It did look like John Boehner had a silver crown of some nature in front of him, what the hell was that? Or am I missing the more important element in this photo? Looks like Boehner is sneaking in a Heil Hitler, possibly to make sure the Nazi’s out there don’t mistake him for a black man due to his tanning obsession.
The fact is that this speech is something that has more or less become antiquated and out dated. We now know the President ate for lunch before it passes down his throat to his stomach, so why this speech? His policy speeches are a regular occurrence and his PR machine gets the word out, analyzed, changed to fit popular opinion, and out again during a single 24 news cycle.

As for the content of the speech, the one thing that really stood out was simple… there were so many mentions of other countries and how great they are doing with so many other things. Going back to the pep rally concept, it is like the coach saying “we know they have a prolific offense and we have alot of injuries on our defense, but we can do it.” This concept of saying other countries are kicking our collective asses in something or another is something that should challenge us is… a slippery slope.

I hope that this alteration in tone, although not as different as I wish it would have been, will help to refocus our ELECTED OFFICIALS to pay attention to those who elect them. Bickering, positioning, and politicizing everything so it can be spun to bolster their re-election bids should be the last thing on any elected official’s mind. Do the job, do it well, represent your constituents well and you will be re-elected and respected.

"All I did yesterday was ask basic questions & they couldn't answer any of them.. the whole thing was incredibly confusing & I'm not sure we got any closer to the truth"

Just started a regular column at @Debriefmedia with "What Do They Know about Us?"

It's a speculative piece about what an alien A.I. might have already put together about humanity versus what we likely know about these Others and their intentions.

In “Ask Dr. Fauci,” Dr. Anthony Fauci @NIH explains how COVID-19 vaccines can both protect against existing variants and prevent the emergence of new ones.