Actors get old, and over time I feel their ability to choose what is and is not a worthwhile script deteriorates with their capacity to act. I am not sure if you watched the movie ‘Righteous Kill‘ with Robert De Niro and Al Pacino. If you did, I am sure you felt it was as big of a pile of horse shit as everyone else on the planet did. 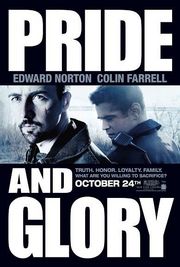 For everything that RK was supposed to be, the real deal came out in 2008 just as RK but this film stared actors who hadn’t let their career cataracts cloud their vision when reading a script (if De Niro and Pacino bothered with that). If you want to see a movie with a similar theme but well written, brilliantly acted, and shot… you need to catch ‘Pride and Glory‘.

This is a cop film, about family, betrayl, crime within and outside of the police department of NYC, everything RK should have been. Including a cast of actors who aren’t too busy playing the persona the character of themselves that they have cultivated into a joke. Edward Norton and Colin Farrell do a phenomenal job of portraying characters, human beings, under massive stress and trying to hold their lives together in the midst of being entangled in a police corruption scandal that results in the death of four officers, and ultimately two more. Jon Voight is the senior law man and patriarch of the family.

IMDB has some pretinent information but the more reliable reviews can be found at RottenTomatos.com