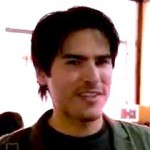 I know I am not the only one who has found the new face of State Farm Insurance to be agitating. If you do a search for him online you will find boards ranting on him, blogs, you name it.

The thing that irritates me the most is that he was clearly chosen to be an ambiguously raced ‘everyman’. It almost appears that he was genetically engineered to be somewhat white, hispanic, and asian all at the same time. White-ish skin tone, a bad asian black hair piece, and some bit of a hispanic je ne sai quoi.

As annoying as that is, where is the black component? Maybe the nose? Or was that part just ignored because they prefer a certain demographic? I am not accusing, just wondering what the logic is here.

The SF-Guy is splattered everywhere all over their website, he is smugly (also annoying) appearing in every break of every TV show known to man as well.

Here are a few blog posts about this mess…

Even a Facebook Page Called: “The State Farm Guy Creeps Me Out”

I am getting a lot of questions re #Russian underwater sabotage capabilities due to the leak on the #NordStream2 pipeline off Denmark.

So just lay out some background reference.

3 leaks. Ian Flemming: "Once is happenstance. Twice is coincidence. The third time it's enemy action". Russia wouldnt destroy its own pipelines. So who is the enemy? This is an open attack on Europe´s security and economy. Was it carried out by US/NATO forces? #NordStream2 https://twitter.com/forsvaretdk/status/1574739041504870400

she won’t go to our southern border but… 🙄