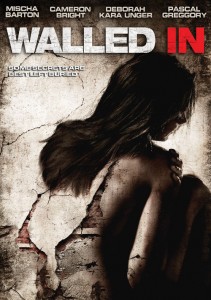 I decided to fire up this one (streaming off of NetFlix on my XBox360) this evening.

Right up front, let me make it clear the first scene is something you have most likely NEVER have seen in a movie. It was startling but brilliant. For those squeamish about children in a horror film. Also, if you have an issue with on screen dog kicking/etc… maybe pass (for you REALLY sensitive people).

Mischa Barton is the protagonist and does a good job of leading us through the story, as “Sam” Walczak a woman who has been working for her father in the demolition business for years and is getting her first shot at planning a building demo. She dresses like a man, is in a ‘manly’ occupation, even leading another character to ask her if she was a lesbian. Maybe her most redeeming quality is that she uses an Alienware laptop, its the geek in me… but still.

Cameron Bright does a mediocre job of playing Jimmy, the building caretaker’s son. He is the one who begins the exposition of the plot, the one who truly begins bringing things out about the building and its secrets. The caretaker is Deborah Kara Unger who seems to have issues, probably more severe than most of the others.  Unger has been in many films, although I (ashamedly so) recognized her from Highlander III aka Highlander: The Final Demension.

Visually the movie is done well. The location is amazing and the shots are well planned out and generally executed just as well. The use of light and dark as contrast is used often and effectively. Much of the movie resembles a Trent Reznor video, which is a good thing in my view of the world. However it seems as if it was intentionally worked over to earn a PG-13 rating, and I hate PG-13 movies as a rule. When it comes to horror movies, I expect R ratings or no rating whatsoever. If I recall the Texas Chainsaw Massacre II and II were X rated films initially. Ah, the MPAA trying to keep us safe from ourselves. There is even a point where ‘Sam’ takes her shirt off, we get a shot of a nude back. Sigh.

One weakness in here is most definitely an homage or direct lifting of the ‘Freddy’s Coming for You’ song, slightly reworded. You know the one, ‘one, two Freddy’s coming for you.’ It’s short, but it takes you right out of the action, if you were in it anyway.

However the the biggest weakness through, is that the plot is so predictable. If you don’t have a pretty solid idea what is going to happen after watching for 20 minutes, then by all means continue to the end. The rest of the world can come up with a better ending in their own minds.

My (generous) rating – 5/10 mainly for the great building