I am not sure how many people are familiar with or even aware of the story of Daniel Ellsberg. He was important enough to get a man the likes of Henry Kissinger to call him ‘the most dangerous man in America’ and for Richard Nixon to call him a ‘son-of-a-bitch.’ 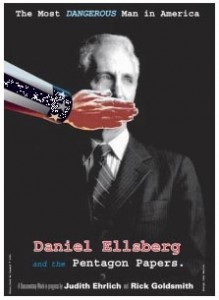 I can tell you that I believe that right now we need a son-of-a-bitch like this to emerge with the type of story and backing documentation that Ellsberg did. He was the former Marine, former defense contractor, Pentagon employee who brought to light a top secret Defense Department study that came to be called ‘The Pentagon Papers.’

This documentary follows the life of Ellsberg from the point that he came out of college and entered the life of a DoD contractor, Marine, and ultimately whistle-blower of the highest magnitude. The info he leaked showed a series of lies that were told from 5 different Presidents.

We as Americans tend to put a great deal of blind faith into our politicians, I believe mainly due to laziness. It is just easier not to think about such things, to not worry, to not put the effort into finding out the truth. They know that we are like that, and they use that to get away with damned near anything.

If you watch this movie and do not walk away from it wondering what the legitimate possibility is that our involvement in the war in Iraq wasn’t something that has been cultivated over multiple Presidential terms (of both parties) and multiple changes in the majority party in Congress then you were not paying attention.

Let me clarify here, even I cannot believe that the 9/11 conspiracy people have it correct with their wild ideas. However, the war in Iraq being brought on by a series of acts that could only result in what happened? I believe it is not just possible, but probable.

While you may need to look around for it, I encourage you to look for “The Most Dangerous Man in America: Daniel Ellsberg and the Pentagon Papers” and go see it. Walk in with an open mind, do not make any presumptions, do not go in looking for anything and at some point during the movie I promise you will feel a weird deja-vu sensation.

George Santayana wrote in his work “Vol 1. Reason and Common Sense” that “Progress, far from consisting in change, depends on retentiveness. When change is absolute there remains no being to improve and no direction is set for possible improvement: and when experience is not retained, as among savages, infancy is perpetual. Those who cannot remember the past are condemned to repeat it.”