So I finally got around to watching Terminator: Salvation after being prodded to do so after watching Leonard Maltin tell me that I should.

First, I realize that he works for DirecTV and that is where I saw his comments on the movie. Second, I realize it is a pay per view ($4.99) and that Leonard was being paid to coax me into viewing this movie. 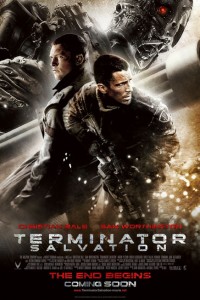 Honestly, I was curious. I am a fan of Christian Bale and I have no problem admitting that even though it may make people think poorly of me. He plays a great angry bordering on psychotic guy, or in the case of American Psycho a totally psychotic guy. This role worked well for him and beyond his star power, the movie was genuinely well done.

The cinematic elements are quite stunning visually other than being terribly distracted by the CG version of Schwarzenegger. While that did nearly draw me out of the climatic ending of the movie, I was interested enough to see where they would go with it.

Could this movie have been more hardcore and dark? Yes, obviously. Should it have been? No. Not for the market it was trying to bring to the theater and to DVD/PPV sales. Would I have wanted it to be more brooding? More apocalyptic? Sad even? Yes. But then again, while I will eat up popcorn movies without much guilt I am not the mass of human cattle that big ticket sales are spawned from attracting.

My thoughts? You can wait for it to hit the pay channels, but for two hours of movie escapism it is worth the PPV.