I hope the majority of people out there are completely and thoroughly disgusted with what is happening in our government. At this point I find it difficult to call it ‘our’ government since it seems that the citizenry of the US has very little to do with what our ‘representatives’ are doing.

Let me make something clear, I am not a republican. I am a Libertarian, although one who is less than thrilled with the organization of the party. I was raised in a house full of them and the principles that stuck with me were the most pure governmental ones. Simply put, smaller government in general, states rights, spending only when necessary and when it is not borrowed money, and individual freedoms (that is liberty for those of you scoring at home.) 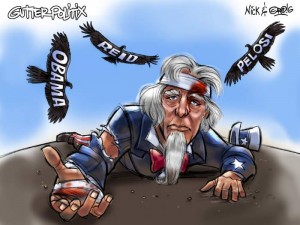 I feel as though our representative government is ignoring the representative part. With calling into play procedural tricks (yes, they are tricks) and justifying them by saying they have been used by republicans previously. Well, yes that is accurate. But on a nearly 1 trillion dollar bill? One that would radically change not just health care but American society? Something that the majority of the country is against? No.

It seems as if Obama et al are telling us that this is not perfect but at least it is something and we can just work it out later. Really? That is how they legislate? Just get something done and worry about what it actually does or doesn’t do later?

Anyone else think it was interesting that the CBO came out with the numbers minus discretional spending and that made their guess at a cost resulting in something just less than a trillion dollars? Which is what some people in Congress had said was the upper limit for them to consider voting for it?

And 120 billion in savings in 10 years… that is if some very big presumptions result in reality. These same types of things are why we still have Congress voting every year to extend the medicare reimbursement so docs don’t end up losing 21% of what they can collect? That was part of the medicare reform bill from a few years ago, and without that exception (which always happens at the last minute) is the only thing keeping docs and hospitals from dropping Medicare patients. Let me ask you. If you had been getting paid at $20 an hour for years with no cost of living increase and the government said you could only collect $16 an hour now, would you keep doing business with them?

The politics and bureaucracy have become its own beast that needs to feed on our livelihoods to survive, when we don’t even want it to! But we have no say in the matter, because those we elect no longer work on doing what we want they do what the beast wants.