At some point FX decided to kick HBO’s ass all over the place. Showtime was never really involved in this race at all, that race being the one involving serial drama. Lets look at the big picture first:

HBO: The Sopranos, Oz, Deadwood (which is where it all came undone)

Winner? Clearly, it is FX. 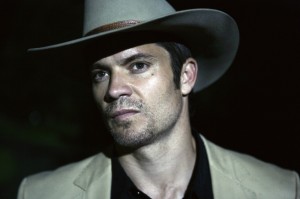 So let me tell you, when a pilot is as good as Justified you know that at least the first season is going to be solid. How many pilots do you watch where you go, ‘holy shit if it was this good think how much better it will get with character and plot development’?

But lets look at where others have gone wrong. This isn’t a long story, it is simple. Shows that are cutting edge and worth pay attention to draw the attention of people who want to ruin everything for the rest of us. It happened to Deadwood, Lucky Louie… wait, this must be where HBO keeps going wrong.

The simple answer that applies to why so many of the best shows do not gain popular praise and viewership is that they are too smart for the generally not so smart majority of those in the country. The popularity of mind numbing entertainment like ‘Who Wants to be a Millionaire’ and ‘American Idol‘ prove that compelling story lines and great actors are much less entertaining than some dope off the street making a fools of themselves. [note: Millionaire is just the only one I could think of since I refuse to watch such nonsense, and I do know that the show isn’t in prime time anymore.]

What I am saying is this, watch these shows while they are on because who knows how long they will remain on the air. While you may be setting yourself up for a massive disappointment when it is pulled to put on a show of ‘funny’ dogs barking hits from Paula Abdul’s catalog, at least you got to enjoy it while it lasted.