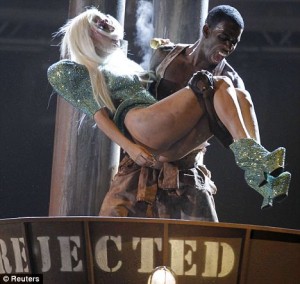 I watched the Grammys like I did the State of the Union a few days earlier. I found something else to watch and flipped back and forth on the commercials.

The music industry is no longer in flux, if it were then there would be in indication of life. Watching the Grammys made it clear that the industry is dead. My only hope is that some sort of comet with a strange radioactive dust passes over the world and brings the music industry back as a zombie. At least then it would be a change. An example is Lady GaGa. You write a catchy song that Cartman sings on a South Park episode and that makes you worthy to perform at the Grammy Awards with Elton John?

Is anyone paying attention? We are being spoon fed tainted music with the germs of the media companies all over it and it is inducing illness. Maybe that is it. Maybe the music industry is already like a zombie and it is infecting those who swallow what they are handed making them zombies as well. Can’t you hear it? Instead of ‘brains’ it is ‘gaga’.

Country music is now pop music sung by people who don’t bury their accents. It is a manufactured product that has a different singer plugged in as one begins to think they really are famous for their talent. They then demand more creative input and the music industry swaps them out for the next indentured servant until the cycle repeats.

When was the last time you heard new music and said ‘wow’ that is really great. If you say Taylor Swift or some “R&B” artist, then you know you are infected with the zombie virus that the industry is pushing. I suggest you blow your head off or ask someone to do it for you.