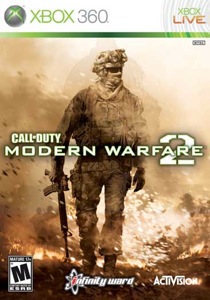 I am not what anyone would classify as a gamer. I can go months without even turning on the XBox360 and oft times it is just going on to watch bad movies via NetFlix on-demand.

However, I do enjoy going online to play Call of Duty Modern Warfare 2 or at least I did before about a week ago. The trouble really began longer ago than that with every high school dope deciding to call everyone ‘kid’. Well, that I could deal with even being in my mid-thirties, particularly since I am playing a video game when being called that. Then about 2 weeks ago everyone decided that calling everyone ‘nigger’ was the way to go. Ok, listen. If you are going to call people things online, then it should be something you would call them face to face. I am quite sure that these dumbasses wouldn’t call me or anyone else a ‘nigger’ in any other situation. This is a perpetuation of the assholes who send people anonymous emails and the like. Everyone is big and tough when they are behind the cover of a keyboard and internet connection.

As if this wasn’t annoying enough, the online games have become about worthless due to this new cheat. Those of you who play online know what I am talking about, it is the ‘care package’ cheat. Basically, a component of the game is that if you get X number of kills in a row you can call in an air drop or care package that will bring you any number of things. Many of these allow for autonomous kills. Thee would include an AC130 plane that circles the map for awhile killing people from on high, or a pave low or attack chopper which will do the same, you get the point. They will run this cheat and keep getting more and more of these until the game play is totally screwed up.

If you want to cheat playing a game, that is cool. It is just a stupid video game, but if you are cheating at a game that others are playing with you what is the damned point of playing? Your focus becomes running the cheat and not actually playing the game. They pad their number of kills they complete challenges faster, but can you honestly tell me they are getting something out of this? The only thing I can really think is that they are the same assholes who run SPAM programs to flood the world with terrible emails. Wait, no. That would require a level of intelligence these morons could not possibly possess. They must just be assholes.

Yes, that has to be it. Assholes.