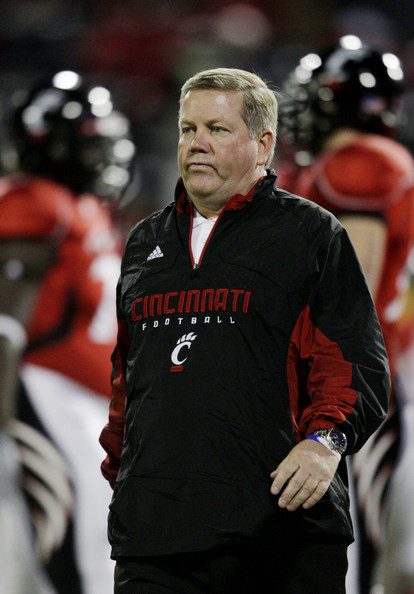 There was a time when UC football meant nothing, to anyone, myself included. I am not sure how an entire University can be classified ‘bandwagon jumpers’ but I think that is close to accurate. When I was at UC it was Bearcat basketball, Bob Huggins, Nick Van Exel, Kenyon Martin, and the like. With Brian Kelly’s arrival to UC there had been a serious let down in athletics with the unceremonious departure of Huggins after some questionable behavior including being put on camera drunk and puking by the side of the road after being pulled over for DUI.

The basketball program was out of the national spotlight, and here is this guy who is going to make UC a football school? In the state where The Ohio State University is the end all be all for NCAA football? Come on, please. We shall see. See we did. We saw the light, we saw hope.

Brian Kelly survived UC’s lack of commitment to football and athletics that had been ushered in by the terror in fishnets Nancy “Degrees earned here before I arrived don’t mean as much as they do now” Zimpher. In fact, he not only survived but outlasted her at UC when she ran off to further her career at SUNY. We rejoiced that the wench was gone. We had a football program that actually was mentioned on ESPN. It looked like we had a strong leader emerging on campus, pushing us forward.

A packed Nippert Stadium. A promise of new facilities for UC football that brought us out of the 1950s. A run at a perfect season. A rumor. A denial. A Big East title. An admission. An end?

The awards dinner is Thursday night, more rumors that Friday will bring the news we have been dreading. We can beg and plead for Brian Kelly not to go, but ultimately why should he stay? UC seems to being doing far too little far too late to keep him, almost as if by agreeing to build the new facilities that it is like they are paying him more money. I am sure he is gone, I am disappointed.

The question is, the true test of character here is not posed to Brian Kelly. The test is being administered to that bandwagon full of Bearcat football fans, where will you be next year for the first game of the season? What about the third, or sixth?